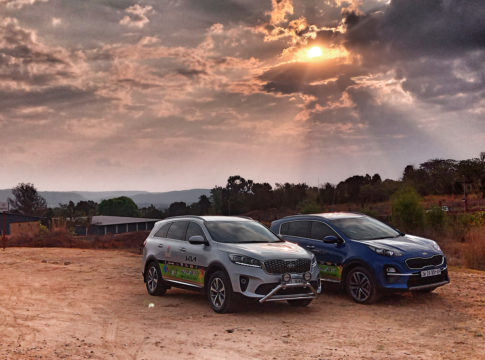 – Seven South African cities in seven days to raise funds for kids with cancer
– Team of intrepid adventurers will drive 5,800km across South Africa in Sorento and Sportage AWD models

21 September 2021 – Today, 21 September, a plucky team of explorers departed Kia South Africa’s head office on an epic trip across the country visiting various hospitals and Kia dealerships in seven cities to raise funds for non-profit organisation, Cupcakes of Hope, in aid of kids with cancer on the 7th annual Kia SEVEN7 Drive.

The adventure is spearheaded by well-known adventure and overlanding journalist, Danie Botha, who will be joined by Anton Willemse Jr, editorial coordinator for media partner, Adventure Afrika, and renowned travel content creator Neo Mokuene, who will document this year’s drive on behalf of Kia South Africa. Performing a vital support role is Margaret Pretorius, a highly experienced events professional. The team will tackle the route in Sorento 2.2 CRDi AWD and Sportage 2.0 CRDi AWD models.

The aim of SEVEN7 Drive is to raise awareness about childhood cancer. The organisers have been hard at work collecting toys, toiletries and basic necessities which they’ll deliver to kids at the various hospitals’ paediatric wards, as well as raising funds for Cupcakes of Hope supporting families in need of medical assistance.

“Kia has been a proud supporter of the annual SEVEN7 Drive since its inception and is honoured to continue its journey in aid of childhood cancer awareness this year,” says Christo Valentyn, GM Marketing for Kia South Africa. “Over the past seven years, the SEVEN7 Drive team has covered vast distances in just about every Kia, and it’s a full-circle moment for the Sportage and Sorento to once again provide the team with reliable and comfortable transport over the seven days of the journey.”

Leaving Johannesburg bright and early on Tuesday, 21 September, the team will visit various hospitals to deliver toys and essential goods, as well as stop in at Kia dealerships in Bethlehem, Durban, Gqeberha, Cape Town, Upington, Polokwane and Pretoria. In total, they’ll complete nearly 6,000 km by the time the journey ends at Steve Biko Academic Hospital on 27 September.

How you can make a difference

Visit Cupcakes of Hope’s website at cupcakesofhope.org and click on the ‘donate’ button for various way to contribute. Cupcakes of Hope will also sell cupcakes at 43 shopping centres across South Africa during this year’s National Cupcakes Day for Kids with Cancer on 25 September. You’ll also be able to make donations to the non-profit at the various stands.

If you or your company would like to get involved in the SEVEN7 Drive, email Margaret Pretorius at info@matchsticksa.com for more details. Donors will be issued a Section 18A tax certificate.

Keep track of the team’s progress on Kia South Africa’s various social media platforms, as well as those of Adventure Afrika (4x4afrika.com) and on the dedicated SEVEN7 Drive Facebook page (facebook.com/seven7drive)